Hello and HAPPY NEW YEAR! I know, it’s been a while and I wondered if I should start the year with a 2017 round up. Because, you know, I sort of went awol somewhere around July, ahem…apologies. But then I thought, it’s already January 17th . THE 17TH!!! What?! And then I thought of everything that has happened since I last updated-which is a lot- and if I could fit all that seamlessly into one post with the resounding answer being…no. So I have decided to share with you some of the highlights, in separate posts because, overwhelm.

Waaaay back in August I was contacted to ask if we would like to take part in a 50’s style magazine shoot where our bespoke garments would be featured. It wasn’t a fashion shoot as such but to show how a certain seaside town had changed from the 50’s to present day. It was for a French magazine, the photographer was the wonderful Melanie from Elle Photography who I have previously worked with on one of our fashion shoots. She is extremely talented, good fun…and so this was a no brainer.

So it was all organised. And then it was cancelled due to horrendous weather. And then rescheduled and the weather was still horrendous but we had a deadline to meet people so no more cancelling! It really was a case of Keep Calm and get that shot which seemed a perfect nod to the era. I decided to take along 3 dresses, 2 of which I had already, 1 of which I didn’t. I really wanted to design something that epitomised this era and those 50’s ladies just loved a polka dot! As I always like to add a quirk to my designs though, we decided to make this dress in a cotton chambray from a local artisan. I knew the finished photos would be in black and white so wouldn’t be an issue and I also knew it would make the dress much more desirable to sell on afterwards.

As it was an outdoor shoot and pouring down, we had to get creative when getting our beautiful model Sacha camera ready and so begged a local café to let us squat a corner in return for us drinking copious amounts of coffee! It was worth it though because she looked stunning.

We then decided to change location to get the lighthouse-built in the 1950’s- in shot. This meant an outfit change in a lovely changing area and venturing down a treacherous pier. At least I wasn’t the one wearing heels.

This next image is probably my favourite and not for it’s beauty but for the tale it tells. The photographer, the stylist and the magazine editor. Great women working together in less than favourable conditions to get that perfect shot… 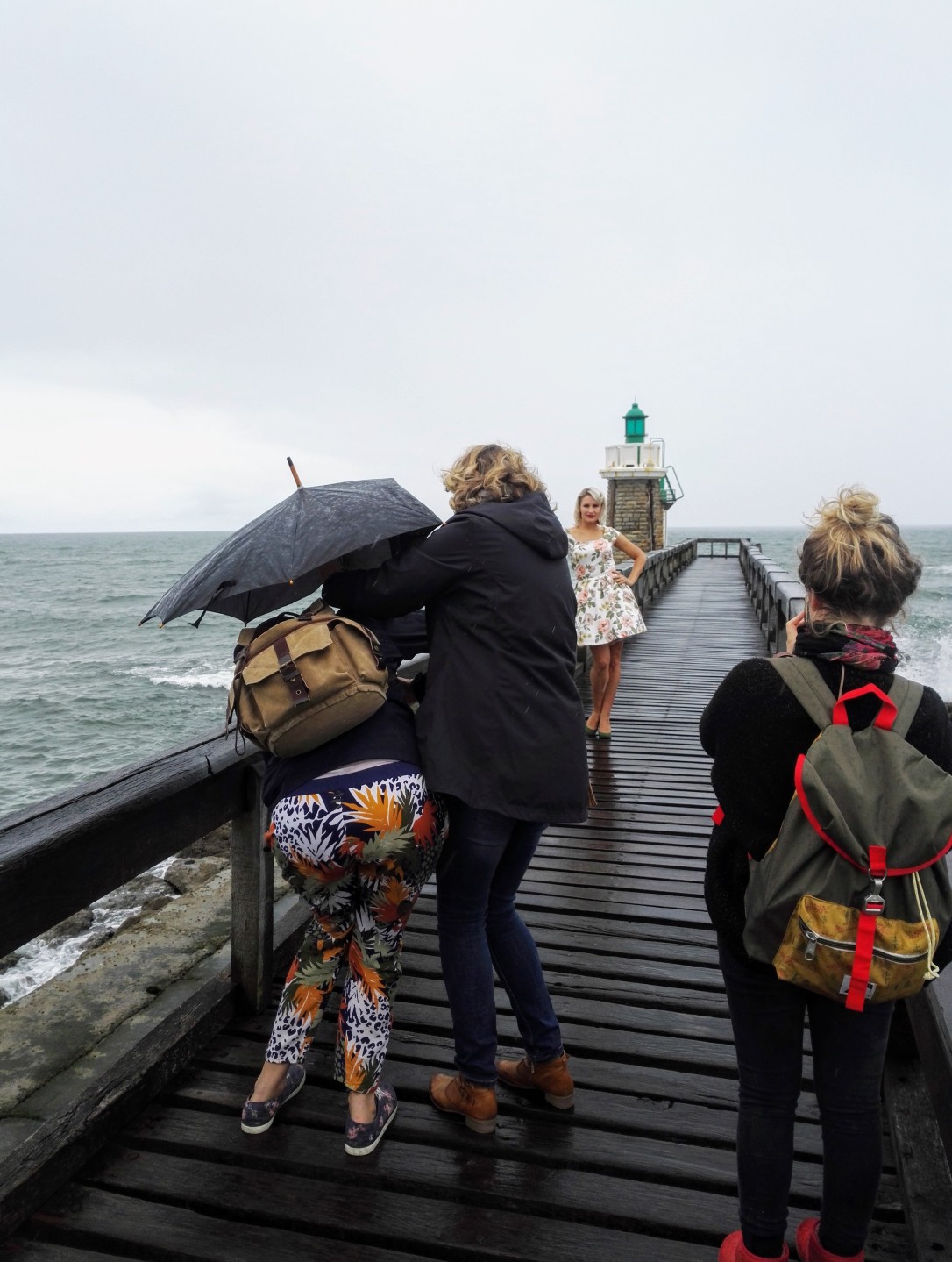 These are some of the amazing shots Melanie got on the day. You may not realise from these shots, the extent to which the conditions were against us. It was blowing a gale and rain was coming at us from every direction. That said, I hadn’t laughed so much in ages. Maybe you had to be there 😉 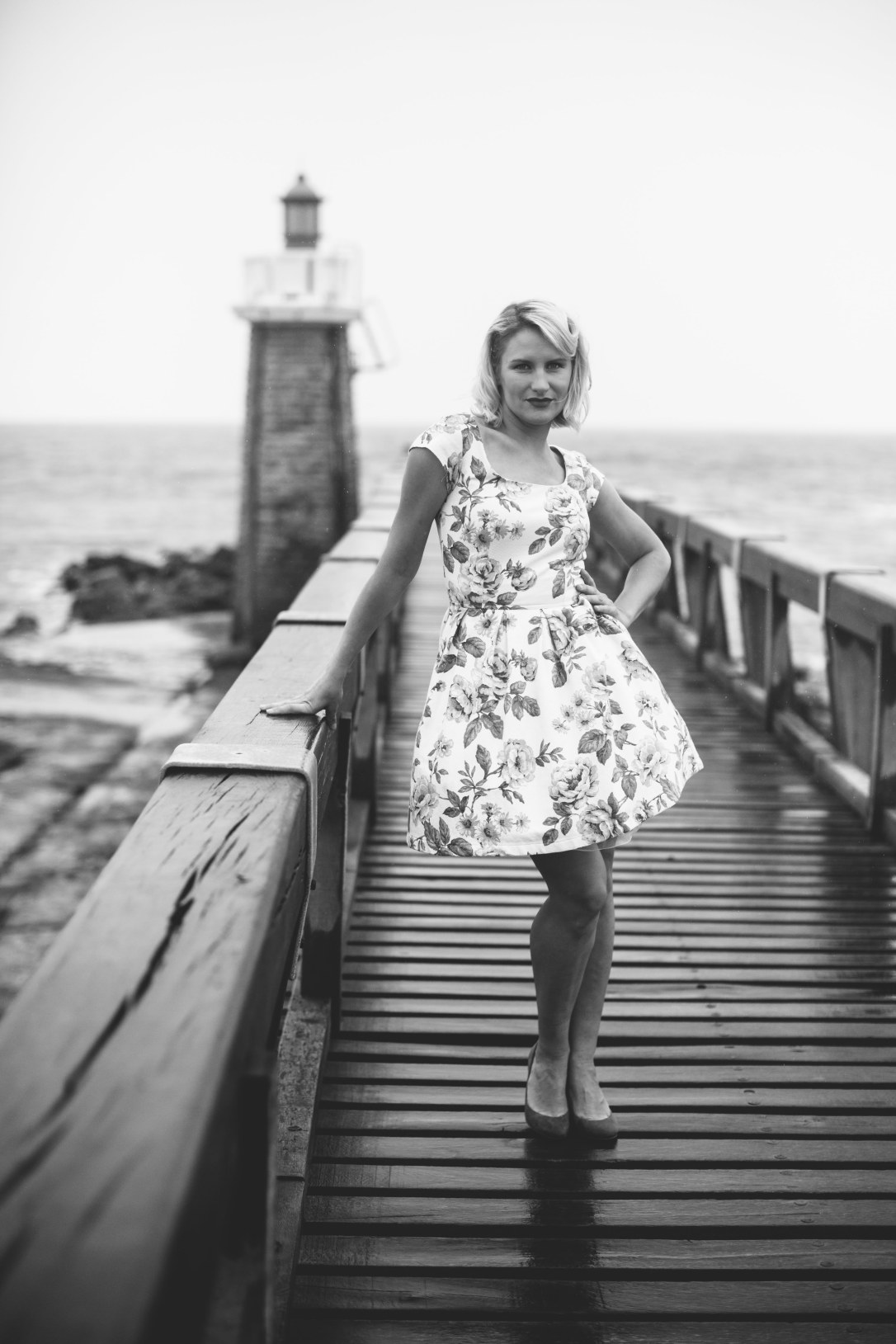 Such a great memory. We’ll be doing another fashion shoot soon for the summer collection and hopefully we will get to forgo the umbrellas. But even if we can’t, we’ll be there till we get that shot!

View all posts by Deedee GK